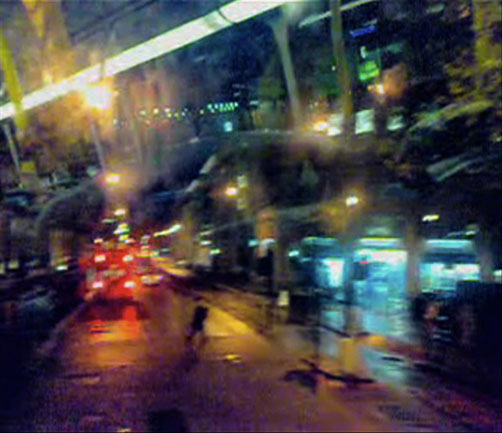 Film still from People I Could Have Been and Maybe Am, Boris Gerrets, 2010

There was no script. Only a vague idea of a film as an attempt to break through the wall of anonymity we all know so well when we travel through the city. This film would be like a social space, a place of encounter. But meeting someone among a city crowd is hard and the camera is a particularly uncompromising intruder. In retrospect, it wasn’t surprising that the people I finally met were in various ways outsiders, homeless drifters through the urban space, a bit like myself. It led to a film that was mostly shot in transient places: the street, taxis,hotel rooms, coffeeshops.

Filming creates one moment while it destroys another one. That is the paradox that defines cinemas’ relationship to reality. This became apparent to me in the continuous negotiation between different interests,between me and my camera, my subjects and our emerging friendships. To my protagonists it was clearearly in the process that they where my actors whose real life extended into the space created by the film. While they were living their life in the first person, I was filming their second persona, the one that pertains to the space of the cinematic narrative. This included myself, which is what made things complicated at times. There is darkness in the film, cinematic darkness. In other words, how the camera records the absence of light - in this case, the mobile phone camera with its rough, grainy images. Inside that darkness resonates my own feeling of the city, its yearning, its mysteries and secrets. There is another layer in the film, embodied by anonymous phone conversations. They represent the collective voice of the city, bouncing about in a virtual and electronic dome that stretches over its skyline.